Hey, hey!  Good morning, afternoon, or evening…depending on when you’re reading this!

This weekend, I really no plans but felt like I moved non-stop and can’t even tell you where the days went!

On Friday, I had to work until noon but, then, the hubs and I planned a day date with golfing and lunch and night date with dinner drinks out with friends.  Every time I’m on the golf course I ask myself what the heck I’m doing on the golf course.  Golf is that tough game that makes you realize that even though you know what to do, chances are, you aren’t going to be able to, actually, do it.  Talk about a mood killer!  Anyway, we spent some time on the course, grabbed a quick lunch, headed home to relax for a bit and shower and, then, headed our for dinner and drinks at our favorite brewery.

The blueberry ale gets me every time.  I can never pass it up.  Even if it wasn’t delicious, I would order just to stare at the beautiful color.

The evening ended with some drinks with friends…and there may have been some dancing.  But, I’ll never tell.

Saturday morning, I woke up with the sun because I wanted to get a jump start on my day!  I headed out to my back porch after making myself some breakfast and sat down to do some work.  I worked on the blog, I did some work for some challenge groups I have coming up, and I did some online shopping.  I, then, moved on to the yard…I cut the grass, trimmed, and weeded the flower beds.  I got a lot done but I’m pretty sure that I lost every ounce of moisture in my body.

It was HOT and I was sweaty!!

After that, I headed inside to cool off in the AC with some Hydrate.  I was pretty sure I needed some electrolyte replacement! 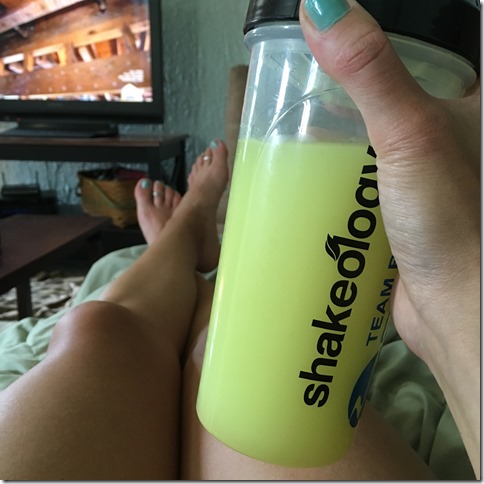 Sunday, I woke up the hubs up early (even though he worked part of the night) so we could have a breakfast date and get some groceries for the week!  He was super excited to go with me!  Insert eye roll here.  We hit up a breakfast buffet, two grocery stores, and, of course, Starbucks… 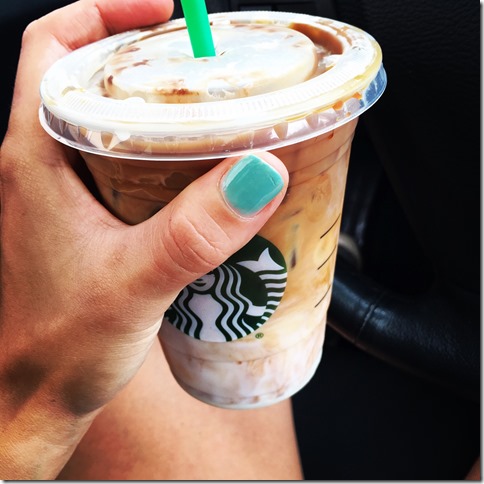 I have been tempted to try their Iced Coconut Milk Mocha Macchiato forever but, because I don’t like coconut milk, I always hesitated.  But, the picture of it made it look SO good.  Yesterday, I gave in and ordered it!  I was a little unsure of how I felt about it during the first couple of sips but, after all the flavors swirled together, I was in love.  It was really yummy and I’ll definitely be getting one again as a treat!

On a funny note: we came home from the store, I cleaned the kitchen, and, then, sat down at the dining room table to write out some cards.  I opened my planner, caught a glimpse of the date, and, immediately, realized that we had a birthday party that day at 2pm.  I looked at the clock and it was 1:43!!!  I yelled upstairs to Lee that he had to get ready because I had to be at a party in ten minutes!  Luckily, it was only two streets over and for the son of our BFFs.  I, obviously, didn’t have a gift to take but we plan on getting together on Colton’s real birthday this week so we’ll just give him one then!  I think he still had a blast at his Mickey/Paw Patrol party! 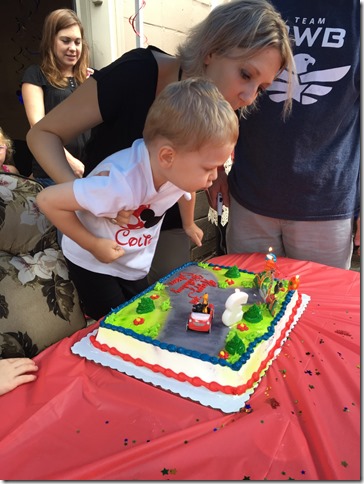 I felt like a hot mess yesterday!  Somehow, I lost an entire weekend in August!  I was, seriously, thinking that next weekend was the 20th!  Where did this month go!?  We do have a wedding on Saturday so I’m hoping that I’ll remember all this week and not ten minutes before the ceremony!!

I hope you all had an amazing weekend and are keeping better track of your time than I am!!

Have you ever forgotten about a party/function?
What was your favorite thing from this past weekend? 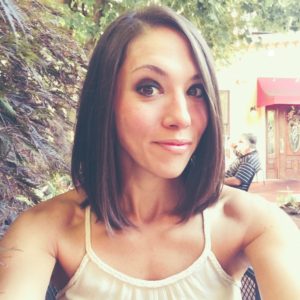 Welcome to my corner of the world! I'm a thirty-something Jazzercise instructor, Beachbody coach, police wife and pup mom; I'm passionate about eating, working out, blogging, shopping, drinking wine, and loving life! I would love to hear from you...if you have any questions or comments, drop me a line at thelifeofkell@gmail.com! Thanks for stopping by!